Connect are delighted to announce our sponsorship of Nathan “Lightning” MacQueen. 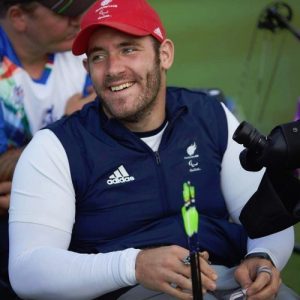 is a British Paralympian archer who competed in his first Paralympics last year at Rio 2016. He lives locally to our main office near Edinburgh and Connect are delighted to be associated with, and to sponsor Nathan. Connect’s marketing director, Nicky Walker, has known Nathan for a number of years and they regularly train together at the gym in Livingston.

A natural athlete, Nathan had played rugby at professional level for Glasgow Warriors and represented Scotland in the under 21’s squad, at this time he was also part of the Scottish archery team.

At the age of 18 his life was turned upside down when a motorbike crash left him fighting for his life. Paralysed from the waist down, Nathan was determined to carry on with a career in sport and started competing in powerlifting until he injured his shoulder on the eve of Commonwealth Games. It was then that his interest in archery was re-ignited and he quickly fought his way into the Paralympics GB team. He represented Great Britain in Rio 2016 and finished 9th, not bad for a first attempt.

He is now ranked 7th in the world and in January 2017 won his first international gold medal at the Fazza International Para-Archery Championships in Dubai where he caused a huge upset by beating the world number one, Alberto Simonelli.